Primary vs. Secondary Loss in FAIR™ Analysis: What's the Difference and Why It Matters 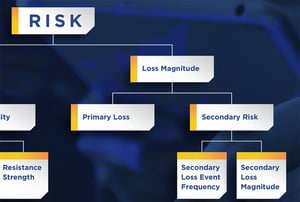 “All models are wrong, but some are useful.” By those words, professor and statistician George Box reminds us that models, including the FAIR™ Model, are approximations of reality. They’re attempts to tell the truth about how the world works in a way reducible to symbols and numbers and operators. But there are degrees of “wrongness.” How the model chooses to approximate reality is the key -- some will get it less wrong and in ways that are useful for the decisions at hand. FAIR is one of those models.

The Loss Magnitude side of the FAIR model attempts to answer the question “How much money might we lose each time this loss event occurs?” It includes two phases of loss, denoted as Primary Loss and Secondary Loss.

Primary Loss refers to losses incurred from the loss event itself, the results of the threat actor successfully impacting the asset. This also includes activities that the primary stakeholder (that’s you!) chooses to do in the wake of the loss event, such as investigating the incident or replacing a damaged server.

See the FAIR model on one page.

An example of this is an encrypted database with PII being breached. If the key is not compromised as well, generally we would not expect to see secondary stakeholder reactions. However, if the key is compromised, then the data is in now in plain text in the hands of a bad guy and that dramatically changes the likelihood we will see fines and judgments, be required to notify affected parties, provide credit monitoring, etc. We use secondary loss event frequency to capture the probability that those loses do occur. 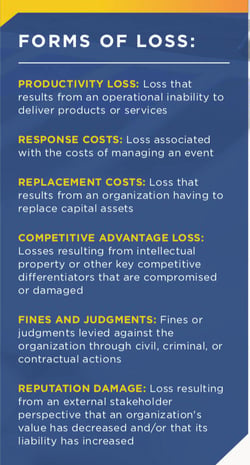 Understanding the distinction the FAIR model makes between primary and secondary, understanding how this simplified view of the world is constructed, helps analysts put anticipated manifestations of loss in the right place in the model and equations they’re using to forecast future losses (see the six forms of loss in FAIR analysis in the chart to the right).

The key is in understanding who is causing the loss to you — the threat actor by harming your asset or you by responding to the event? Or outside parties who cause loss to you after the fact by responding to the event that unfolded? Primary losses come from the threat actor carrying out the loss event and from our own reactions to that event. Secondary losses come from the reactions of secondary stakeholders.

This topic directly relates to a question the RiskLens Academy recently received from a learner in the Fundamentals course:

“How are Fines secondary when they directly hit the organization’s bottom line?”

Indeed, isn’t all loss “direct” if “direct” means “coming from the organization’s coffers?”

“Direct” and “indirect” costs/losses aren’t terms that are defined in the FAIR standard. They aren’t necessary or helpful in determining if a loss is primary or secondary, as the question demonstrates. Fines and judgments are predominantly secondary because they are imposed upon the organization/owner of the asset/primary stakeholder by outside parties like judges, juries, government agencies, etc.  (secondary stakeholders.). They are losses forced upon the organization in reaction to the loss event by outside stakeholders and are therefore secondary losses.

A related question recently was asked:

“Who is considered a secondary stakeholder? Where do I draw the line between the two?”

Most commonly, secondary stakeholders are clearly separated from the organization (primary stakeholder) itself. Examples may include:

Media – Relevant if media coverage is involved in the reaction to the event occurring. Specifically, any losses/money spent associated with responding to interviews, press conferences, etc.

All of the above losses are caused by the event impacting outside parties and their resulting reactions.

The distinction between primary and secondary loss isn’t about “direct” vs. “indirect” costs/losses, it isn’t about the chronology of whether the loss occurs “now” or “later,” however those terms are defined, it’s a matter of who is causing the loss to you. While there are no FAIR Police roaming the halls of Enterprise Risk Management and Cyber Risk programs, it’s important that analysts consistently and accurately use the FAIR model so that analyses are internally comparable.

Understanding Secondary Loss, the Price of a Data Breach

A Crash Course on Capturing Loss Magnitude with the FAIR Model