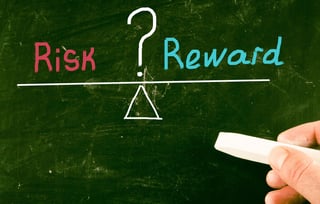 In probably half of the presentations I give about FAIR, someone in the audience will raise their hand and ask, “What about positive risk?” Well, in this blog post I’ll provide the first part of my answer to that question.

Which “positive risk” are you talking about?

The second belief system that leads people to believe in “positive risk” is based on the premise that “risk = uncertainty”, and uncertainty applies to both positive and negative outcomes.

This blog post will focus on the first belief system, which is overwhelmingly what people are referring to when they ask the question during my presentations. The “uncertainty” belief system deserves a blog post all its own.

Let’s compare a couple of examples of “positive risk” vs. “negative risk” in the context of this first belief system.

ABC Company builds a new manufacturing facility in a country that offers inexpensive labor (we’ll refer to this country as “XYZ”). ABC Company does this in order to decrease costs and increase its profit margin. In doing so, it also introduces various opportunities for loss that it didn’t have before, for example:

Under this belief system, the increased level of risk that comes from these potential loss events would be viewed as “positive risk” because it was introduced deliberately in an effort to improve profit.

At this point, I may not have to say another word. You may have already connected the dots and recognized that ABC Company chose to use computing technology expressly because to do otherwise would likely be suicidal from a cost and product/service delivery perspective. In other words, the “upside” for this choice isn’t a specific revenue line item but rather business survival. Regardless, upside is upside, and whether ABC Company’s leadership deliberated on whether or not to use computing technology they did, in fact, make that choice because of the upside and in doing so introduced the risk that comes with it.

What I find interesting is that, under this belief system, risk and opportunity are correctly recognized as two sides of a coin, but only under example 1, above.  But as I point out in example 2, they always coexist.

Another nail in the coffin

In order to accept the notion that there’s such a thing as “positive risk” under this belief system, then logically we also have to accept the notion that “negative opportunity” exists. After all, whenever we chase opportunity we also introduce the potential for loss. This logical equalization would mean that risk and opportunity are the same thing. From a measurement, management, and communication perspective, this is impractical and not very useful (to say the least).

A more practical approach is simply to recognize that business-related opportunity and risk always result from decisions and/or actions. Therefore, those decisions and actions are the substrate — the “coin”  so-to-speak — that opportunity and risk share. Risk represents the downside component of decisions and/or actions, and opportunity represents the upside.  Besides being logical and intuitive, it is also much less complicated than the contrived (and logically shaky) notion of “positive risk” under this belief system.

Summary for this belief system

This belief system attempts to account for the fact that risk and opportunity go hand-in-hand — that’s the good news. Unfortunately, as I described above, a closer look reveals that the underlying premise is based on a false dichotomy and introduces logical problems.

The next post in this series will discuss the “risk = uncertainty” belief system and whether it makes “positive risk” possible.