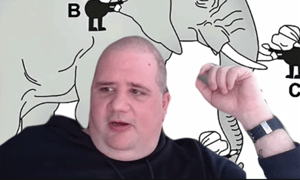 Jack Whitsitt has been a FAIR practitioner since 2016, built the quantitative risk analysis program at Bank of America and is now doing the same at Datto (the services provider to MSPs), is a SIRA and FAIR Institute board member – and officially qualifies as a wise man of the FAIR movement.

In a talk titled “What They Didn’t Teach You in FAIR School” for the Greater Ohio Chapter of the FAIR Institute,  Jack presented 21 pithy, ground-level insights on starting, socializing, and advancing a FAIR risk analysis program (see them all as stickies in the image below).

Here are three highlights but you really should watch the entire talk – it’s an education in 30 minutes.

“I see a lot is people try to map risk analyses over to FAIR and they try to stick with the definitions of the factors. Don’t.

“FAIR is easy, it’s open it’s flexible. It’s really taking a series of Venn diagrams and Monte Carlo-ing them together so that you get uncertainty reduced…

Nobody Knows What Controls Do

“Almost no one I’ve met knows what controls actually do. They’ll map it to pieces of the NIST CSF, they’ll talk about prevent, detect, mitigate…The kill chain is a bit of a red herring – that’s just telling us what place in a series of steps a control might have an impact.

“But it doesn’t tell us if it is really interfering with the bad guys. Bad guys aren’t natural disasters, they’re thoughtful, they’re going to pivot.

“One of the best pieces of advice I can give is to think about how controls are interfering with the bad guys in their operations, not so much is it stopping this chain of events.

You Should Be the Center of the Universe

“When we talk about people and communication, it takes a village, and you should be at the center of the universe.

“One of my frustrations is that often FAIR is treated as in addition to or adjacent to what’s happening in information security.

“If you have something that’s telling you how much risk you have…that should be the engine that runs your organization. If you are acting and you don’t know how much risk there is, then what exactly are you doing? Are you managing risk, are you doing the right thing? The answer is no.

“So, from an output standpoint, there isn’t a part of the organization that shouldn’t have a cascading impact from FAIR.”