Aggregating Expert Opinion in Risk Analysis: An Overview of Methods 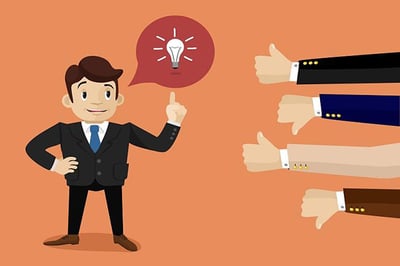 Expert elicitation is simple to define, but difficult to effectively use given its complexities. Most of us already use some form of expert elicitation while performing a risk analysis whenever we ask someone their opinion on a particular data point. The importance of using a structured methodology for collecting and aggregating expert opinion is understated in risk analysis, especially in cyber risk where this topic in common frameworks is barely touched upon, if at all.

There may be instances in a quantitative risk analysis in which expert opinion is needed. For example, historical data on generalized ransomware payout rates is available, but an adjustment is needed for a particular sector. Another common application is eliciting experts when data is sparse, hard to come by, expensive, not available, or the analysis does not need precision.

Author Tony Martin-Vegue chairs the San Francisco Bay Area Chapter of the FAIR Institute and is a veteran FAIR analyst.

Supplementing data with the opinion of experts is an effective, and common, method. This technique is seen across many fields: engineering, medicine, oil and gas exploration, war planning - essentially, anywhere you have any degree of uncertainty in decision making, experts are utilized to generate, adjust or supplement data.

If asking one expert to make a forecast is good, asking many is better. This is achieved by gathering as many opinions as possible to include a diversity of opinion in the analysis. Once all the data is gathered, however, how does the analyst combine all the opinions to create one single input for use in the analysis? It turns out that there is not one single way to do this, and one method is not necessarily better than others. The problem of opinion aggregation has vexed scientists and others that rely on expert judgment, but after decades of research, the field is narrowed to several techniques with clear benefits and drawbacks to each.

The Two Methods: Behavioral and Mathematical

The two primary methods of combining the opinion of experts fall into two categories: behavioral and mathematical. Behavioral methods involve the facilitator working through the question with a group of experts until a consensus is reached. Methods vary from anonymous surveys, informal polling, group discussion and facilitated negotiation. The second major category, mathematical aggregation, involves asking experts an estimation of a value and using an equation to aggregate all opinions together.

Each category has its pros and cons, and the one the risk analyst chooses may depend on the analysis complexity, available resources, precision required in the analysis and whether or not the drawbacks of the method ultimately chosen are palatable to both the analyst and the decision maker.

Combining expert estimates using behavioral methods span a wide range of techniques, but all have one thing in common: a facilitator interviews experts in a group setting and asks for estimations, justification, and reasoning. At the end of the session, the group (hopefully) reaches a consensus. The facilitator now has a single distribution that represents the opinion of a majority of the participants that can be used in a risk analysis.

Most companies already employ some kind of aggregation of expert opinion in a group setting: think of the last time you were in a meeting and were asked to reach a consensus about a decision. If you have ever performed that task, you are familiar with this type of elicitation.

The most common method is unstructured: gather people in a room, present research, and have a discussion. More structured frameworks exist that aim to reduce some of the cons listed below. The two most commonly used methods are the IDEA Protocol (Investigate, Discuss, Estimate, Aggregate) and some forms of the Delphi Method.

There are several pros and cons associated with the behavioral method.

The other method of combining expert judgment is math based. The methods all include some form of averaging, whether it's averaging all values in each quantile or creating a distribution from distributions. The most popular method of aggregating many distributions is the classical model developed by Roger Cooke. The classical model has extensive usage in many risk and uncertainty analysis disciplines, including health, public policy, bioscience, and climate change.
Simple averaging (e.g. mean, mode, median) in which all participants are weighted equally can be done in a few minutes in Excel. Other methods, such as the classical model, combines probabilistic opinions using a weighted linear average of individual distributions. The benefit to using the linear opinion pool method is that the facilitator can assign weights to different opinions. For example, one can weigh calibrated experts higher than non-calibrated ones. There are many tools that support this function, including two R packages: SHELF and expert.
As with the behavioral category, there are numerous pros and cons to using mathematical methods. The risk analyst must weigh each one to find the best that aids in the decision and risk analysis under consideration.

Which Do I Use?

As mentioned at the beginning of this post, there is not one method that all experts agree upon. You don’t have to choose just one – you may decide to use informal verbal elicitation for a low-precision analysis, and you have access to a handful of experts. The next week, you may choose to use a math-based method for an analysis in which a multi-million dollar decision is at stake, and you have access to all employees in several departments.

Deciding which one to use has many factors that vary from the facilitator’s comfort level with the techniques, the number and expertise of the experts, the geographic locations of the participants (e.g., are they spread out across the globe, or all work in the same building) and many others.
Here are a few guidelines to help you choose:

You have a small group, and it’s not feasible to gather more participants

You do not want to lose outlier numbers in averaging

You have a large group of experts

You need to go fast

You don’t have outlier opinion, or you have accounted for these in a different way

The question is focused, unambiguous and the data doesn’t leave much room for interpretation

We all perform some kind of expert judgement elicitation, even if its informal and unstructured. Several methods of aggregation exist and are in wide use across many disciplines where uncertainty is high or data is hard to obtain. However, aggregation should never be the end of your risk analysis. Use the analysis results to guide future data collection and future decisions, such as levels of precision and frequency of re-analysis.

Stay tuned for more posts on this subject, including a breakdown of techniques with examples.

The Wisdom of Crowds by James Surowiecki

Superforecasting: The Art and Science of Prediction by Philip Tetlock

The Delphi method, developed by RAND in the 1950’s

Improve your risk analysis skills - learn from the FAIR experts at the annual FAIR Conference.
Get the details on FAIRCON.