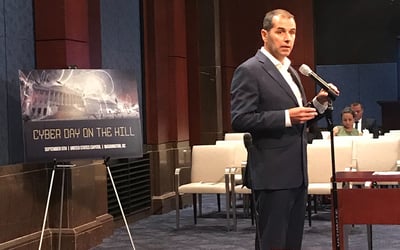 FAIR Institute President Nick Sanna was among the featured speakers last week at the first annual Cyber Day on the Hill, an event organized to educate Congressional staff members on cutting edge thinking in cybersecurity, both on the national policy level and for protecting their own offices from attack.

Nick introduced the Cyber Day audience to FAIR principles and the movement to making risk quantification standard operating procedure in cyber risk management. “The dark ages of cybersecurity are over,” Nick said. “There are now standard ways to measuring the effectiveness of cybersecurity initiatives and making sense of what’s working and what is not.” He was joined by speakers from IBM, Palo Alto Networks, Microsoft and other tech leaders.

Among the sponsors of the event was Congressman Jim Langevin, the Rhode Island Democrat and Co-chair and Co-founder of the Congressional Cybersecurity Caucus, a speaker at the upcoming FAIR Conference, September 24-25 at National Harbor, MD, outside Washington. Read more about Langevin’s FAIRCON appearance.

The invitation to speak to Hill staffers is the latest sign that FAIR techniques and principles are gaining recognition in the government sector:

Government employees keep up with the latest in all these developments by joining the Government Chapter of the FAIR Institute, which meets regularly in Washington, DC (next, Oct. 3, 2019). Become an Institute member to join the chapter.

Luke Bader is Director, Membership and Programs for FAIR Institute