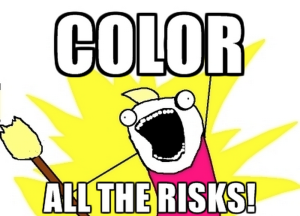 If there’s one thing I’ve learned about assessing risk over the years, it’s this: creativity will always fill the void of uncertainty. A second, related lesson is that data *is* the plural form of anecdote to most people most of the time.

In other words – people are great at making $#@!% up. And let’s be honest – hopping a Trolley ride through Mr. Roger’s Neighborhood of Make Believe Risks is a lot more fun than dealing with the realities of uncertainty and ambiguity. 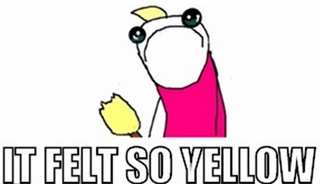 The unfortunate outcome of these tendencies is that many risk assessments become a session of arbitrarily assigning frequency and impact colors to all sorts of bad things conceived by an interdepartmental focus group rather than a rational information-driven exercise. Aside from the entertainment value of watching people argue about whether yellow*yellow equals orange or red, this isn’t a great recipe for success. And thus, we all-too-often underestimate the important risks and overestimate the unimportant ones. See Doug Hubbard’s The Failure of Risk Management for more on this topic.

Clearly a more “intelligent” approach is needed for analyzing information risk. When tackling various issues or problems, I almost always try to start with a set of interesting questions. This probably harkens back to my scientific background, where simple questions pave the way for more formal hypotheses, experimental design, data collection, etc. Thought experiments like the one we’re conducting here are less rigorous than those done in a lab, but formulating questions is still a useful exercise. In that spirit, here’s a (not exhaustive) list of questions risk assessors/analysts have that I think threat intelligence can help answer.

But how, exactly, can threat intelligence help answer these questions? What frameworks or processes are available? Where does the relevant intelligence come from and in what form does it exist? How do threat intel and risk management teams collaborate to produce meaningful results that drive better decisions? These are the kinds of questions we’ll explore during the rest of this post (and series). 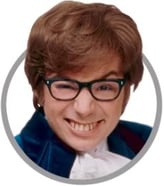 There is surprisingly little information I’ve found in the public domain on the topic of using threat intelligence to drive the risk analysis process. There is, however, a paper from the RAND Corporation that goes the opposite way –Using Risk Analysis to Inform Intelligence Analysis. It concludes that “risk analysis can be used to sharpen intelligence products…[and]…prioritize resources for intelligence collection.” I found this diagram especially useful for explaining the interplay between the two processes. It’s well worth reading regardless of which direction you’re traveling on the risk-intelligence continuum.

Other recommended quick reads that touch on threat intel and risk analysis include this article from Dark Reading and this one from TechTarget. But neither of those venture into the realm of frameworks or  methodologies. If you know of others, feel free to engage @wadebaker or @threatconnect on Twitter. I’ll update this post for the benefit of future readers.

Let’s be FAIR about this

We’ve already reviewed NIST SP 800-39 and ISO/IEC 27005 in this series as prototypical examples of the risk management process. While both of these frameworks (and most others) “cover” risk analysis, Factor Analysis of Information Risk (FAIR) reverse-engineers it and builds it into a practical, yet effective, methodology. Note – Neither I nor ThreatConnect have any stake whatsoever in FAIR. I’ve chosen to reference FAIR because a) it’s open, b) it’s a sound analytical approach and c) it plays well with threat intelligence, and d) it plays well with ISO 27005. Other frameworks could be used, but I don’t think the process would be as intuitive or comprehensive. But your mileage may vary. More info on FAIR is available here, here, and here.

The diagram above represents how FAIR breaks down the broad concept of risk into more discrete factors that can be assessed individually and then modeled in aggregate. The lowest tier will be our focus for infusing intelligence into the risk analysis process. Before we go there, though, it will be helpful to discuss a similar decomposition model for threat intelligence. 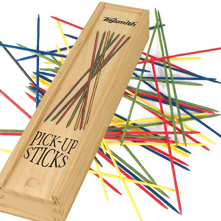 I’ve long maintained that one of the primary challenges to managing information risk is the dearth of accessible and reliable data to inform better decisions. Correcting this was the primary driver behind Verizon’s Data Breach Investigations Report (DBIR) series. As we studied and reported on more security incidents, we realized that the lack of a common language was one of the key impediments to creating a public repository of risk-relevant data. This lead to creation of the Vocabulary for Event Recording and Incident Sharing (VERIS) and launch of the VERIS Community Database (VCDB). If you’re looking to bridge the worlds of incident response and risk management/analysis, I suggest reviewing those resources.

But this post is about bridging the chasm between threat intelligence and risk analysis. While IR and intel share many commonalities, they also differ in many ways. Similarly, VERIS contains elements that are relevant to the intelligence process, but was never optimized for that discipline. That goal was taken up by The Structured Threat Information eXpression (STIX™), a community effort lead by DHS and MITRE to define and develop a language to represent structured threat information. The use of STIX has grown a lot over the last several years, and it has now transitioned to OASIS for future oversight and development. It’s also worth noting that a good portion of the STIX incident schema was derived from VERIS, which is now a recognized (often default) vocabulary within STIX. There’s also a script for translating between the two schemas, but I can’t seem to locate it (help me out, STIX peeps!).

The point in bringing this up is that if you’re looking for threat intelligence to drive risk analysis, learning to speak STIX is probably a good idea.

What about the Diamond?

Thanks for asking. Yes, the Diamond Model for Intrusion Analysis, which we talk about a lot here at ThreatConnect, is definitely a threat intelligence model. But it is a process for doing threat intelligence rather than a language or schema. Because of this, the Diamond Model and STIX are complimentary rather than competitive. The STIX data model maps quite well into the Diamond, a subject we’ll explore another time. For now, suffice it to say that using FAIR, STIX, VERIS, VCDB, DBIR, and the Diamond might sound like crazy talk, but it’s perfectly sane. Ingenious even.

With all of that background out of the way, we’re at the point where the rubber finally hits the road. The first thing I’d like to do is identify risk factors in FAIR that can be informed by threat intelligence. To do that, I’ll use a modified version of the FAIR diagram shown earlier. Orange stars mark risk factors where intelligence plays a key role in the analysis process; grey represents a minor or indirect relationship.

Next, I’ll attempt to create a mapping between these FAIR factors and STIX data model constructs, which lays the groundwork for intelligence-driven risk analysis. Before I do that, though, I’d like to mention a few things. First off, I apologize for the rigid and rather dry structure; I couldn’t think of a better way of presenting the necessary information. You’ll notice a lot of redundancy. This is because the relationships between the models are not mutually exclusive; a STIX field can inform multiple FAIR risk factors in different ways. Furthermore, the STIX schema inherently contains many redundant field names across its nine constructs. One final note is that I have not listed every conceivable relevant STIX field for each risk factor, but rather tried to focus on the more direct/important ones. That’s not to say I didn’t miss some that should have been included.

FAIR Definition:
The frequency, within a given timeframe (typically annualized), that contact with threat actors is expected to occur.
Relevant STIX fields:

FAIR Definition:
The probability that a threat agent will act once contact occurs.
Relevant STIX fields:

FAIR Definition:
Measure of an asset’s ability to resist the actions of a threat agent.
Relevant STIX fields:

FAIR Definition:
Loss that occurs directly as a result of the threat acting against the asset.
Relevant STIX fields:

FAIR Definition:
Percentage of time that loss events are likely to affect secondary stakeholders (e.g., customers) in a manner that may cause an adverse reaction on their part.
Relevant STIX fields:

I’d like to reiterate that I don’t view this as a done deal – much the opposite, in fact. One of the things I hope this post prompts is further discussion and refinement on this topic (generally) and this mapping (specifically) by the FAIR and STIX user communities.