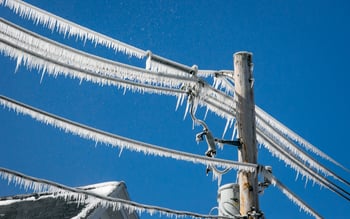 It’s a risk analyst’s nightmare: An extremely low-frequency event with extremely high magnitude impact. That’s what the state of Texas has been living through as a deep freeze knocked out the state’s un-winterized water and power systems, putting millions of Texans in danger without hope of outside help, as the state intentionally had isolated from the national electric grid.

Donate for Texas Relief - Find a List of Charities Here

For some insight, I talked to a world expert on risk management failures, Michele Wucker, author of The Gray Rhino: How to Recognize and Act on the Obvious Dangers We Ignore.

Michele was a keynote speaker at the 2020 FAIR Conference (watch the video of her conversation with FAIR creator Jack Jones). Her next book, You Are What You Risk: The New Art and Science of Navigating an Uncertain World will be published in April.

Was the failure of the utility grid in Texas a Gray Rhino, an obvious danger ignored?

A lot of planners didn’t see the extent of the challenge, but many did say Texas is not prepared for extreme weather. A certain part of the calculations about weather makes sense; snowplows would rust out before they were used. At the same time, there have been these cold snaps in Texas in the past.

There needs to be a much better cost-benefit calculation around what are the things you need to do, particularly now with climate change. We need to be prepared for weather that is much more extreme than we might have thought.

You could talk about this as a crash of gray rhinos--the zoological term for a group of rhinos--a bunch of  different things going wrong at once. It’s an example of the importance of systems thinking to prevent catastrophic failures. We saw how interconnected state governments, municipalities and energy systems are in Texas. You don’t want to completely shut yourselves off because if something extreme happens, nobody’s got your back.

One reason Texas was nearly entirely shut off from the national grid was to preserve a deregulated market. The profit incentive should have encouraged the energy suppliers to winterize or hold extra reserves for cold weather but somehow that didn’t work.

I think there is a big problem with mispricing risk, and also poor distribution of risk across the full system of stakeholders. Companies lost money by not being able to provide power, but the people who really bore the brunt were the people who need the power. There’s a real imbalance between who is bearing the risk and who’s reaping the profits. That’s where regulators come in.

But it’s a mistake waving the regulation or deregulation flag. The question needs to be pragmatic: What works and where the market is failing, how can we sensibly fix that? Take the ideology out of it.

Is there a cultural factor at play in risk perception in this case? Maybe the “don’t mess with Texas” attitude favors a disconnected and deregulated market.

I talk a lot about that in my new book. Within the US, people of different political persuasions, different education levels, have different ideas of how risky different things are and how much risk is acceptable.

Culture is very important and so is risk literacy and risk education. Once people start talking about risk specifically, it starts to open up a new conversation that wouldn’t have been possible before. In Texas, it’s time for a conversation about the risk umbrella that’s there: Who makes sure the lights go on and the heat goes on when you need it and are the right incentives in place to make that happen?

Any lessons here for the risk management profession?

I talk to so many risk management and business continuity professionals who have told me that one of their biggest frustrations is getting other people in the company whose behavior risk management depends on, to take risk as seriously as they do.

Particularly in finance, a lot of risk management comes down to assigning numbers to things. Sometimes, it’s based on past information that has some bearing on the present and sometimes, it’s numbers seemingly pulled out of the air as we saw in the subprime crisis. In a lot of financial world, there’s a quantification aspect that makes a lot of people’s eyes glaze over.

I think that risk professionals often don’t pay enough attention to interacting with other people and to that behavioral aspect of how people respond to risk. For risk managers, take a hard look at how non-risk professionals think about risk and how to bring them on board with a change in behavior.

For instance, since the great financial crisis, we’ve seen a lot of boards add risk committees. They checked a box, but has that led to a change in behavior that in turn leads to a reduction in risk and a greater ability to pursue opportunities?  That is really an open question right now.

Donate for Texas Relief - Find a List of Charities Here

Read an article by Michele Wucker on the Texas utility crisis