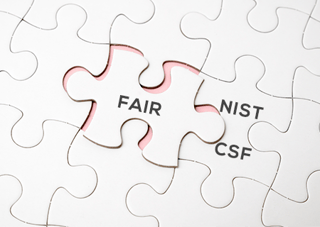 This 5th post in this series comes to you courtesy of useful feedback I received from leaders within the NIST CSF program team. They had read the first four posts in this series and wanted to clarify a couple of points. We also agreed that a 5th post (this one) might be a good idea to flesh out some thinking on the second point below.

Based on their clarifications I’ve made two changes to the 2nd post in the series. If you’ve already read that post you don’t need to go back and re-read it, as the changes simply boil down to:

The second point above is both good news and bad news. Clearly, the existing tiers are not useful as a measurement scale for sub-categories, so it’s important that organizations quit trying to fit that square measurement peg into the round sub-category holes. So the good news is that NIST wasn’t expecting the tiers to be used that way.

The “bad” news is twofold:

Too often, measurements in assessment frameworks are binary “yes/no” when there are actually relatively few conditions that can accurately be described as only either completely in place or completely missing. When someone is faced with choosing a “yes” or “no” answer for a condition that’s isn’t binary in nature, they have to choose whether to give zero or full credit. Either option is inaccurate and thus misleading.

There are also inherent limitations even when a more nuanced ordinal scale is used (e.g., 1 thru 5). For example, if an organization describes its “Detected event analysis” capabilities as being at a “3” level, what does that actually mean? What’s the real difference between a 3 and a 4 in that capability, or a 2 for that matter? Without pretty clear differentiation, there is simply too much room for subjectivity and bias. Furthermore, even if differentiation in levels is clear, how much confidence should there be in that rating. Is the rating simply someone’s wet finger in the air or is there something to back it up?:

This confidence dimension is pretty important because there can be a big difference in efficacy between an organization that has validated its risk management capabilities versus one that “thinks” it’s at a 3 (or whatever) level.

Something a bit more useful

A very simple solution that I’ve used to good effect is two-dimensional. It uses a three-level capability rating scale (“Weak”, “Partial”, “Strong”), and a three-level “confidence” (or maturity) rating scale (“Unsubstantiated”, “Substantiated thru policies and/or processes”, “Validated thru testing”). We’ll get into definitions for these in a minute, but here’s what a matrix view of the scoring would look like: 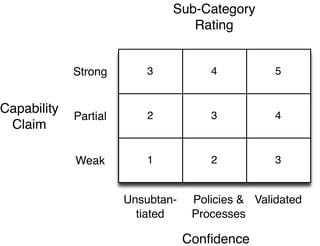 As you can see, Confidence is given the same weight as Capability. For example, an organization with Partial capability in some sub-category (e.g., Detected event analysis) is given credit if it has policies and/or processes that help to ensure event analysis is being performed at the Partial level — i.e., it isn’t entirely an ad hoc state.

Why a 3-level scale? Why not more? In my experience it is often extremely difficult to clearly define differences in levels when there are four or more of them — at least when you’re using qualitative descriptions. Three levels are much easier to differentiate, which makes the ratings more likely to be reliable and less open to debate. I’m also of the opinion that as long as you’re using qualitative rating “buckets”, you shouldn’t expect too much granularity. Fortunately, by measuring in two dimensions, each with a 3-level scale using the matrix above, you effectively achieve a 5-level rating scale for each sub-category (as shown in the matrix values above).

This two-dimensional structure also enables a bit richer analysis of an organization overall. Not only can you say things like, “20% of the subcategories are rated at a Level 4 condition” (the combination of claimed capability and confidence), but you can also articulate an organization’s ability to substantiate its conditions, which I would submit is a strong measure of maturity. In other words, an organization with an average Sub-Category Rating of 3.6 but an average Confidence rating of 1.8, is to be less trusted than an organization with the same average Sub-Category rating but a higher average Confidence rating (e.g., 2.3). The first organization simply can’t defend its claims as reliably as the second one can.

And for those in the audience who gasp at my use of math on ordinal scales (which is typically a very bad idea), averaging is one of the few mathematical functions you can use without being guilty of first degree analytic heresy (it’s more of a misdemeanor). Just keep in mind that averaging tends to leave out a lot of important information; minimums, maximums, and distribution shapes for example.

In its simplest state, the definitions for Strong, Partial, and Weak can be very high-level. For example:

Obviously, this still leaves room for subjective judgment, particularly when it comes to “highly” effective versus “marginally” effective, and “most” versus “minority”. Still, I’ve found these definitions to be clear enough (and coarse enough) to use without spending too much time wrangling over whether a sub-category is one thing versus another, and it’s easy to document the rationale behind the choice that’s made. It’s also generic enough to reasonably apply to any of the sub-categories.

One interesting challenge with qualitative/ordinal scales is that InfoSec practitioners can be extremely self-critical. It isn’t unusual for an organization’s InfoSec team to rate a sub-category as Partial or Weak, only to have an external third party (e.g., an external auditor or regulator) say, “Well, compared to everyone else you’re Strong.”, which is a relative comparison to the industry. This is actually an important concern for at least a couple of reasons:

There is a way to make this 3-level scale more objective, but it involves a lot of work, both up-front and potentially over time. Essentially, for each sub-category you have to define specific, objective characteristics for each of the three levels. Let’s look at “Detected event analysis” as an example: 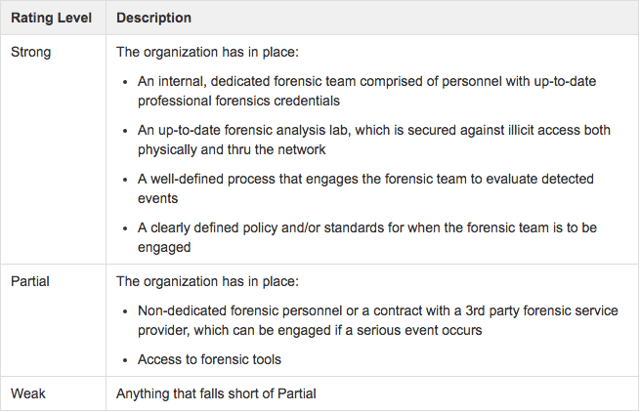 Clearly, this still has a certain amount of subjectivity involved — like what constitutes “well-defined” and “up-to-date”. Nonetheless, it provides better clarity than simply “Highly effective,” etc.

Defining criteria like these for roughly a hundred NIST-CSF sub-categories would be a non-trivial exercise. It also would probably be difficult to get consensus on what these detailed criteria should be (and I can easily imagine that a lot of people will have ideas for improving my example). In addition, the criteria would have to be reviewed and updated periodically to capture improvements in technologies and techniques.

Other benefits of fleshing out the sub-categories at this additional level of detail would include:

Yes, I do realize that one of the “benefits” of the CSF not having clearly defined criteria and instead simply referencing existing standards, was that it was less prescriptive and more flexible. I guess from my perspective the framework becomes something of a middleman then, and it doesn’t provide the clarity and consistency of measurement that I believe could be some of it’s greatest potential benefits.

The Confidence scale is a little more straight forward. Essentially, the definitions boil down to:

In order for any assessment framework to be reliable and defensible, the measurement scale needs to meet at least a few requirements:

Regardless, although it’s obviously important to use a well-defined scale to rate sub-categories, we still have to keep in mind that what we’re measuring is capabilities.

Yes, there is an implicit and logical assumption that better, more mature capabilities equate to less risk, but the framework gives us no way of knowing how much less risk, or whether the current or residual levels of risk are acceptable.

In order to achieve that level of intelligence, you need explicitly measure risk using an analytical model like FAIR, as described in the 4th post in this series.

If you missed my previous posts on NIST CSF & FAIR, please read parts one, two, three and four.